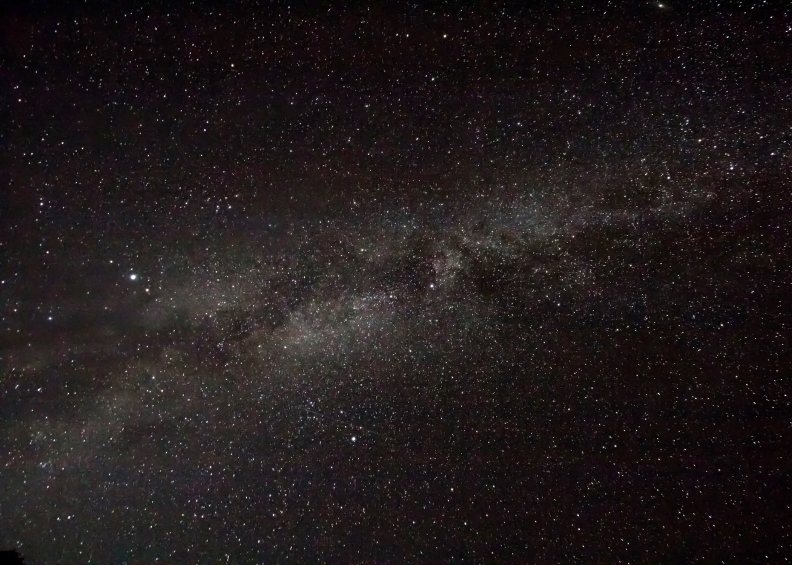 In my previous posts, I’ve alluded to my photographs of the actual Milky Way. Not to be confused with the candy bar photo I shared the other day. While I was hoping to capture a photo of the Upper Barker Reservoir with the Milky Way climbing from the horizon into the night sky, this photo of what was directly overhead is what turned out the best.

As you can tell from the camera settings, I had the ISO set to 1600 in hopes of capturing as many of the stars as possible. However, at that setting I also captured a bunch of noise. I went for a 30 second exposure, which I had learned was short enough to keep the stars from becoming blurry due to movement, but long enough to capture as much as possible.

I did have a couple of challenges that worked against me in capturing this photo.

1. I was all alone, which can place your sense on edge when you are up in the mountains wandering the woods. At one point, while walking with my gear toward a spot to photograph, my headlamp lit up two sets of glowing eyes off in the distance. My spotlight flashlight helped me identify the owner of the eyes – two deer enjoying a late-night snack. I was in Black Bear Country, so I am glad those eyes didn’t belong to a different animal.

2. When I arrived at the lake, I didn’t feel comfortable wandering too far down any trail and into the woods (yes, I was scared. Wouldn’t you be scared?). The only spot I found that would allow me to photograph north while keeping the lake in my viewfinder was to stand on a floating dock. I know, a moving platform isn’t the best when trying to capture the stars, but it was what I had to work with. I just had to keep really still when the shutter was open.

3. I’m an amateur. I did read a bunch of online tutorials (Dave Morrow Photography, PhotographyTalk, Jeff Sullivan Photography) and watched some fabulous YouTube videos (Tony Northrup), but it was the first time I had gotten away from the city lights and was attempting to capture the Milky Way.

4. A novice with Adobe Lightroom 5. It wasn’t until after I returned from the trip that I downloaded a trial version of Lightroom so I could see if it is something I should invest in, or just stick with Photoshop, which is what I had been using. I’m still learning the program, and I will admit that I have a long way to go to learn its full potential. But I would rather photograph something that needs minimal edits so I am not making major adjustments in Lightroom. Not that anything is wrong with that, but I would like to manipulate as little as possible.

5. I did have some apps on my phone (The Photographer’s Ephemeris and Stellarium), but the cold weather, combined with limited signal wiped my battery out on the first night, making any apps I had planned on using useless.

If I were to do it again, I would probably try taking photos at multiple ISO settings so I could really learn how much noise is added to the photos as I increase my ISO. I would also bring my planisphere so I knew exactly where the Milky Way was and could identify which part of the Milky Way I was photographing – or at least the constellations appearing in the photo.

I am planning another excursion out to the Bonneville Salt Flats on August 9 to try my hand at this again. I have invited some friends along, and if you are in Utah and interested in checking it out, here’s a link to the event on my Facebook page. Hopefully there will be no clouds in the sky and I can capture something better than this one, hopefully with some of the majestic mountains and white salty ground in it. Until then… happy shooting.

One Reply to “First photograph of the Milky Way”