Last month I received a note from a friend, directing me to a website that would allow me to enhance my photography skills via photo assignments. It is for The Church of Jesus Christ of Latter-day Saints. As I browsed the site to learn more about what they are looking for, I came across a page listing LDS temples across the globe that need to be photographed. While most of the temples were outside the United States, I was surprised to see that the Jordan River Utah temple was among the list. Since that temple is less than five miles from my home, I took it as a personal challenge to capture the temple at dawn.

Yesterday morning I woke up before the sun, grabbed my gear and headed to the temple grounds. Since this was the first dawn photo shoot I had ever done at a temple, I wasn’t exactly sure what to expect. I found another photographer there who had the same idea and I enjoyed a casual conversation with him about photographing temples. While I had brought multiple lenses with me, my go-to lens for this shoot was my Canon 10-22mm lens. I took some photos up close to the entrance, some by the fountain and others further back. When I imported them into Lightroom 5, I was loving what I was seeing. Even though I had captured some bracketed exposures during my 45-minute photo shoot, I was pleased at the look of the single photos with a few minor adjustments. 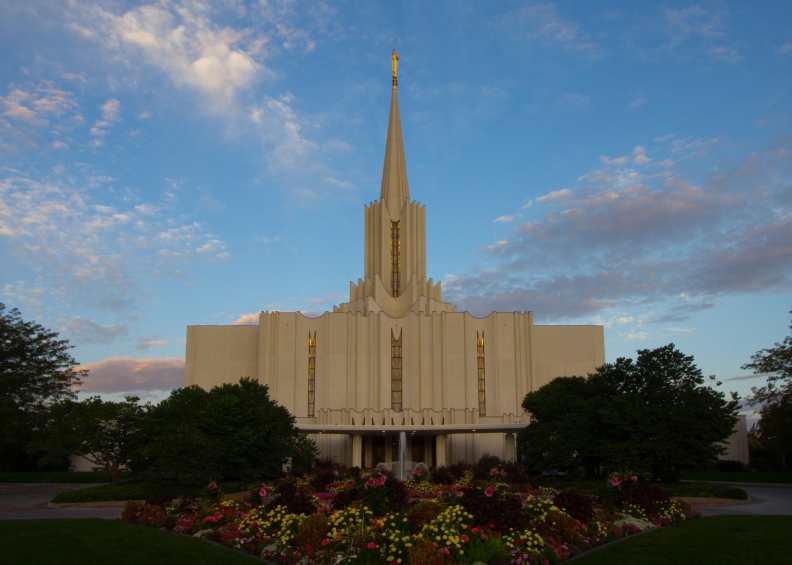 My plan is to submit some of these photos to the aforementioned website so that others who are looking for photos of the Jordan River Temple for use in magazine articles, blog posts, or other communication methods to share their testimony of eternal families, they will be able to use it. I guess I have to at least submit the photo and see if they accept it – but if not, then I’ll just have to take the feedback and go back for another shoot. But I am really pleased with the way this photo turned out, and its sister photos that you can check out on my LDS Temples set on Flickr.