I got a ping pong table for my birthday on March 16. It wasn’t until a week later that I had some friends help me get the massive table home and into the basement. It was another week before I was able to try putting the table together, but I was only able to get so far until I needed additional manpower to complete the assembly. I can’t lift the tables up onto the folding mechanism by myself, and my 10-year-old son doesn’t have the strength… yet. Now that I’ve voiced my sobbing about my unfinished birthday present, let me get on with the photo.

In my last photo, I shot salt crystals that were falling. In looking at the crystals a little closer, I noticed that when the flash went off at initial trigger, the crystal is bigger, but once the light of the flash ceased and the shutter was still open, the visibility of the falling crystal faded, thus creating a little streaking action. This got me to thinking – could I do something like this with a ping pong ball (especially since I have a dozen ping pong balls and no table to play them on. Here’s what I came up with. 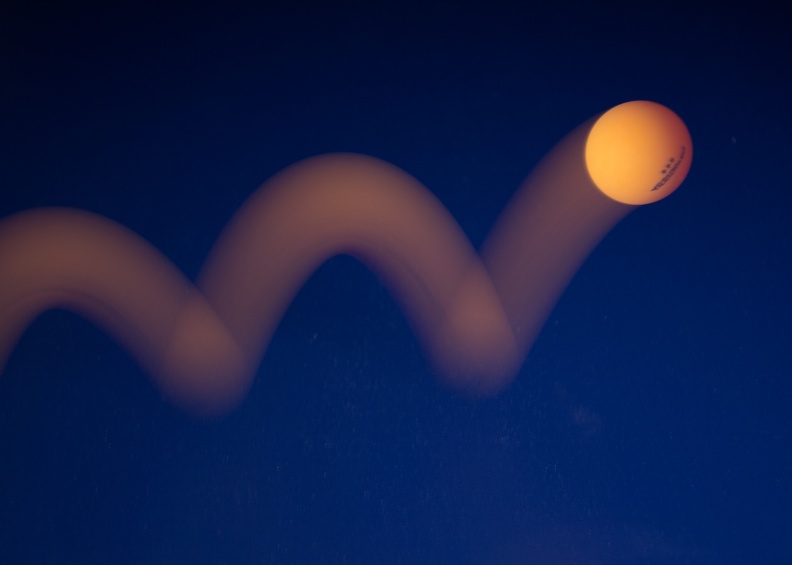 One question I want to pose to the reader is – which direction is the ball traveling in the photo – Left to right or right to left? Take a moment to think about it before reading on.

After getting all the lighting, tripod and camera settings ready to go, I stood on the right side of the camera and got the bouncing ping pong ball in motion. As soon as it got in front of the camera lens, I would trigger the shutter and flash. The initial burst of light illuminates the ping pong ball and literally stops it mid-flight. The secondary lighting I had set up would provide less light to the continually moving ball, thus giving it the motion blur as it bounces out of frame. In short, the ball is moving right to left, and the tail of the frozen ball is actually the path it pursued AFTER the shutter was triggered.

I’ll have to play with this a little further in the future, but I thought it created a neat looking photo.