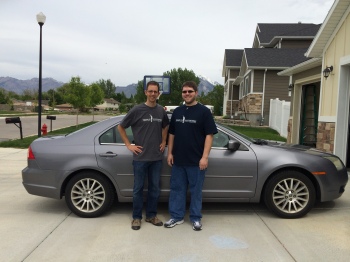 The good news: My brother Christopher and I had the car loaded up and we were ready to hit the road by 3 pm on Friday, May 16. The bad news: There was a rollover accident on the main route connecting us to our southern direction, so we spent an extra 1.25 hours getting to our first stop. It was frustrating to start out the road trip more than one hour behind our schedule, but once we made it beyond the traffic jam, we hoped to make up some time along the way.

We reached the Payson Utah Temple, which is still under construction, around 5 pm. We unloaded all the gear and I offered Christopher his quick flight lesson on using the Phantom Quadcopter and GoPro Hero 3 (Black Edition) I had borrowed to capture some aerial footage during our temple trip. We set up in the church parking lot just south of the temple and did out best to try and capture some footage. I think we got some useable footage, but I still haven’t had a chance to fully examine the footage. 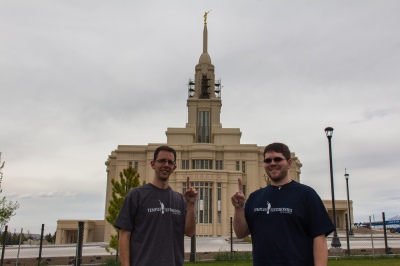 Once the Quadcopter was in Christopher’s hands, I went to work with my Canon 60D, switching out lenses and adjusting settings to capture the Payson Utah Temple. I would have loved for the sky to be more blue – as opposed to the nearly solid sheet of white, non-puffy clouds – but that’s one of the challenges photographers run into: We can’t change the weather, so you look for the best shot and adjust accordingly.

After our 20 minutes was up, we posed in front of the Payson Utah Temple for a group photo, sporting our custom t-shirts, and indicating temple No. 1 of 16 on our statewide road trip. Then it was back in the car and off toward Manti, Utah. We stopped in Nephi Utah to grab some Wendy’s, but the line was so long with almost no movement, we abandoned that option, grabbed some sandwiches from the adjoining gas station and were back in the car. 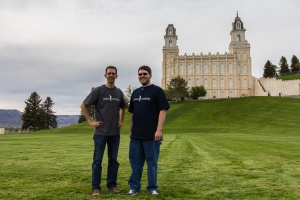 We made good time on the way to the Manti Utah Temple, and we made two stops in Manti to capture the temple. Although I had visited the Manti Utah Temple last year, the reflection pond in the park just west of the temple on the hill made for a great photo. Then we drove closer to the temple, Christopher pulled out the Quadcopter and lifted off, while I went to work with my camera. We only allocated 10 minutes for the Manti Utah Temple so we could make it to St. George, Utah, before it got too late, so we snapped our No. 2 photo and jumped back in the car.

As we approached Cedar City, we had a decision to make: President Thomas S. Monson, prophet of The Church of Jesus Christ of Latter-day Saints, announced a temple for Cedar City, Utah, during General Conference in April 2013. However, there has been no groundbreaking and no official announcement of where the location of the temple will be. However, there is speculation – so do we head to that plot of vacant land to photograph where the temple may be built or continue on to St. George. We opted to continue to St. George, but will have to make another trip to Cedar City when the on-site work begins. 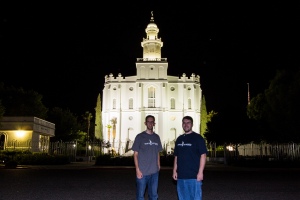 We arrived at the St George Utah Temple around 10 pm and the temple was lit up – it looked magnificent. I had hoped to be there for sunset, but like I said earlier, you go with what you’ve got. We both started doing our thing, and at one point, I had a vehicle pull up behind me and saw a camera flash. I didn’t want to get in their way, so I started to move out of the way for them to get a photo (I was standing on the sidewalk just east of the temple near the road). One of the ladies in the car jokingly said that I should just give them one of my photos. Well… why not. I struck up a conversation with them, explained what I was doing with Temples and Testimonies, and said that I would email them one of my photos of the St George Utah Temple if they would provide me with a testimony that I could add to my online project. They agreed and provided me with their email address, so once I finish editing those photos I will definitely send them a photo with information on how to provide a testimony. 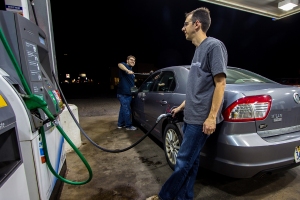 After time ran out on the temple grounds, we headed up to the Sugar Loaf (the large bluff just north of town that offers a magnificent view of the whole city) and hiked out to the top. We kept our time limited up there as well (and the port-o-potty at the trailhead made a great location for a potty break – saved time), then it was back in the car, off to get some gas before heading down the road on our second leg of the road trip toward the Monticello Utah Temple via Kanab, Utah, and Page, Arizona. I’ll share that leg of the trek in my next blog post.

Read about the second leg of the road trip or the final leg covering 11 LDS temples.