There are two specific reasons that I am grateful my younger brother Christopher was interested and able to come with me on the 1,300-mile road trip. First, I enjoyed talking with him about life, family, work, education, religion and much, much more. Second, he works the graveyard shift at his work, so I knew he would be a fantastic overnight driver. And he didn’t disappoint!

Since my brother was driving, I used the free time as an opportunity to more closely examine and post on my social media channels for Temples and Testimonies. To my surprise, I discovered that LDS Living Magazine had posted a portion of my project news release to their website, and the traffic to my blog was climbing. I was excited to see how it would impact my views throughout the remainder of our road trip. I later found out that LDS.net also posted something about my road trip on their website.

After gassing up just outside of St. George, Utah, we headed on the longest individual leg of our journey – St George to Monticello. I was hoping to not have to do any backtracking during our statewide tour, so our overnight journey took us across the Utah-Arizona border multiple times. And one thing that helped us stay awake during the drive, since it began at 11 pm Friday night with the goal of reaching Monticello for sunrise, was to stop at almost every border crossing to get a picture of the Welcome to Utah or Welcome to Arizona sign. 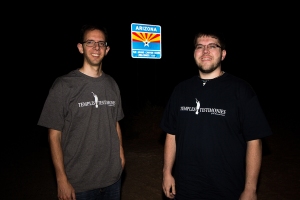 We traveled through Colorado City, Fredonia, Kanab, Page (Arizona) and then around the mountains near Monument Valley before heading north again toward Blanding and Monticello. While trying to nod off and get some rest while he drove, I was fighting the excitement of the whole road trip. My brain would not stop processing – and it was this processing that helped me realize I had miscalculated the amount of time it would take to complete all 1,300 miles. I had listed the goal as 38 hours to complete it, but realized my schedule completed it in 32 hours. But I felt a little stupid for not doing my math right. Silly me!

Fortunately, I was able to get some ZZZZzzzzss during the night, but it was not a lot and I knew the lack of sleep would catch up with me eventually. We stopped at the Welcome to Utah sign along Highway 191 and after grabbing a brothers photo, I spent about 10 minutes shooting the landscape. The moon was full, but it was behind the direction I was shooting which allowed me to capture some of the stars without getting the washed out moon in the photo.

During the long exposure of the landscape, I would use my Speedlite and manually trigger its flash to help illuminate the very reflective Welcome sign. I tried a few different exposure lengths, as well as ISO and aperture to change things up. I would have loved to have spent another 30 minutes there, but I didn’t want to forget the primary purpose of the road trip – visit all 16 LDS temples in Utah in just over 1.5 days.

We switched drivers after our middle-of-nowhere photo shoot and I pulled us into Monticello about 10 minutes before the sun crested above the eastern horizon. Perfect timing for the golden hour of dawn. We both went to work – Christopher with the quadcopter and me with the Canon. One of the first shots I sought was of the Angel Moroni and the nearly full moon. But to do that, I had to stand on the lawn of a hone just north of the temple. I figured it was early enough so I wouldn’t bother the residents of the home, but as soon as I stepped onto the lawn, the elderly couple living in the home walked out from the back of the house, headed over to the temple. My guess: It’s the home of the temple president and his wife. They offered a very nice good morning greeting before opening the temple’s gates and doors.

After capturing some photos and aerial footage, we hopped back in the car, eager to find something great for breakfast. But Monticello ended up not having anything that looked like a quick place to grab breakfast, so we continued on to Moab. McDonald’s ended up being our breakfast – maybe not the healthiest option, but definitely quick. Before hopping back in the car and making our way to Vernal, we decided to take a quick detour into Arches National Park. After all, what Utah road trip would be complete without at least one stop in a National Park? Am I right? Since I already have a National Parks Pass, there was no cost for the 30 minutes we would be inside the park. After some thought, we decided Balanced Rock would be easy to get to and quick to grab a quick brothers photo before skeedaddaling out of the park. 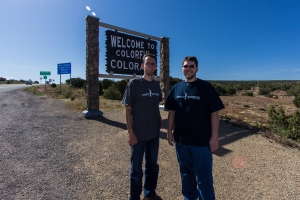 We parked next to the trailhead, grabbed the camera gear and headed 20 feet down the trail before setting up for a photo. We snapped two or three, then headed back to the car. A tour bus driver stopped us to inquire about our T-shirts – “What’s Temples and Testimonies?” We explained to him about the statewide road trip we were taking, as well as the project to collect testimonies from Latter-day Saints and share them on my blog. He then talked about how his son wants to visit all 16 LDS temples in Utah in one year – similar to our road trip, but a little less condensed. 🙂 He asked for a business card so he could check out the trip and photos, then jumped back in the car and off to Vernal.

Chris was finally able to get some sleep. But I felt bad when we had to stop at the Utah-Colorado border to grab a photo. I had to wake him up for it, but I don’t think he really got too much sleep after that. But he was a trooper, and after passing into Colorado, we headed north up a rather rural highway (139) and was totally in love with the gorgeous countryside and high mountain road. We even ran into some patches of snow near the summit, before descending from the mountain and heading back into Utah.

We finally arrived at the Vernal Utah Temple, and it was my first-ever visit to this House of the Lord. I found this temple a little more challenging to photograph than many of the others. There were high walls surrounding the temple, which didn’t offer a very clear view of the building, without getting super close (so I was luck to have had my wide-angle 10mm lens). 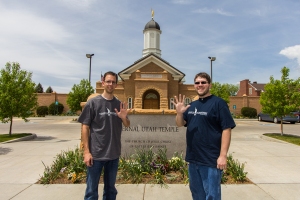 The entrance to the temple seemed distanced from the actual building, so knowing how to photograph this one made me think a little harder than some of the others – and with the little sleep I’d gotten, my brain wasn’t functioning super fast. There was also a wedding party on the temple grounds, so we were doing our best to not disturb them. However, the quadcopter flying overhead nearby seemed to irritate a few people in the party – not sure if they were nervous about what was being filmed, or if the kids kept looking up instead of at the camera. 🙂

Once we ran out of time, it was back in the car, a short stop for gas, another attempt to get Wendy’s for lunch (which failed because the line was super long and slow-moving), a stop at Subway for some healthier lunch options, then off to hit the third leg of our road trip. It took us about 24 hours to photograph the first five temples on our trip, but it would only take us nine hours to complete the remaining 11. The third leg was going to be intense, with little downtime between each temple. But we were hitting the homestretch… regardless of how tired we were.