I’ve always been amazed with photos of star trails, more specifically circumpolar ones. Up until now, I always took one long exposure photo to capture the nightly movement in the heavens, and it’s worked well for me on previous occasions (Arches National Park). But while vacationing at a family cabin along the shores of Bear Lake, I had to take a different approach. The lights from the cabin would have become washed out with a 10-15 minutes exposure, and I wanted to go a lot longer than that. So I did some online photography research before heading up to the lake, and once the moon moved behind the cabin (roughly 12:30 am), I set up my gear and a camping chair and went to work – at least until the sprinklers came on one hour later. 🙂

Here’s the final outcome from my hour-long, 120-photo adventure. 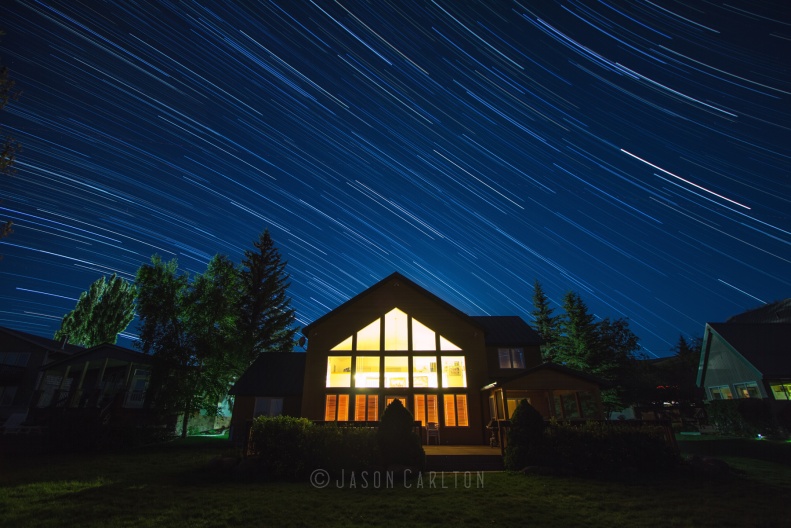 While this was a pretty amazing outcome for my first attempt at this technique, and I thought I would share with others the steps I took to create it so that you can, too.

But first, I want to point out something in the photo that I think is really cool, and was only possible to capture to this degree using a wide-angle lens (10-22mm). If you look at the star trails on the left side of the photo, you’ll notice they curve to the left and bottom of the photo and become more noticeable the further you get to the outskirts of the photo. On the right, you’ll notice they curve to the top and right edges of the photo. The point in the middle of these curves would be the equatorial line. I hope I made sense in explaining that, but I found it to be a pretty neat celestial capture (if I do say so myself).

Before even heading out to the location of your choice, you’ll need a few things. Here is what I had with me:

With the end product in mind, you’ll essentially capture as many 30-second photos as you can and later combine them together to create the star trails. So you’ll want to maximize everything you can to have a 30-second exposure capture enough light to make it worthwhile. Here are the settings I used for my photo:

One of the trickiest parts will be selecting your location. You want to get away from city lights if possible, as you will see more of the stars and have less light pollution. I think photos work better when they have something terrestrial in them – a photo of just the stars doesn’t help put the beauty of the heavens and the earth into perspective. You’ll also need to pick a time when the night will be at its darkest and when the moon won’t be making its way through your framed shot. I use The Photographer’s Ephemeris app ($8.99 USD) on my iPhone, which is a very handy app for night photographing.

Once you’ve found your spot, you’ll need to frame your shot. If it’s too dark outside to see your framing, up the ISO on your camera as high as it will go so you can do a shorter shutter speed to snap a photo until you get the framing you desire. But be sure to bump your ISO back down – the lower you can get it, the better. So let’s get into the camera’s setting.

NOW TO PRESS THE BUTTON

Great. You’ve got the camera settings set, you’re location picked out and your shot framed. It’s almost time to press the button. One last thing to check – make sure there are no sprinklers set to run while you are out there. It could make for an unwanted surprise. 🙂

In all seriousness, you should be good to go. But there is one shot you’ll want to capture before you start capturing your actual star photos. You’ll want to re-attach the lens cap so you can capture a black frame that will be used by the StarStax program to help reduce the amount of noise in your final photo. With the lens covered, snap one photo using the same settings you plan to use for your actual star photos. Then remove the lens cap and you’re ready to go… for real this time.

You’ll want to push and lock the shutter release cable – much like you were taking a long exposure in Bulb mode – but make sure that after your first 30 seconds exposure, the camera automatically takes another photo, then another and another. When I initially triggered my shutter release cable, it stopped after its first 30-second exposure. Why? Because I did not have the camera set to continuous shooting mode. Once you hear that it is continually capturing a photo every 30-seconds, you can head off to do whatever you would like. I wasn’t brave enough to head back into the cabin and leave my nearly $2,000 in gear sitting in the backyard in the middle of the night, so I sat in my red camping chair behind the camera. This is where the patience comes in.

I passed the time playing Angry Birds Go! on my iPhone, reading a book and watching the night sky. I saw a few shooting stars and a satellite pass overhead and was partially hopeful they were picked up by my camera. However, I don’t think my ISO was set high enough to capture the quick movement of the shooting stars or the dimness of the orbiting satellite. It didn’t even pick up the plane that flew through the frame during my last 5 minutes of shooting.

I was able to capture 120 photos during my one-hour photo shoot. I was hoping to go for two hours, but I also was happy to head inside and get some sleep.

I knew my photos would need some editing, so I imported all of them into Lightroom. On the first photo in the series, I did my edits – I adjusted the settings to help make the photo look like what I was hoping the final outcome would look like. I reduced highlights, increase clarity and vibrance, and adjusted some of the hues to scale back the lights inside the cabin – they were pretty orange and yellow to begin with. Once I had that one photo looking the way I wanted, I applied those settings to all the other photos in the series. Since I wasn’t sure how to do that, I’ll save you the time of looking it up online like I did.

Once all your photos are edited, export them as JPG images into a single folder on your computer. I kept the photos at the high quality I usually use for all my other photos and couldn’t find anything online about the need to keep the photos to a certain size. You should be able to do the same, but it may depend on the speed of computer you are using.

COMPILING THE PHOTOS IN StarStaX 0.60

Now for the easy part. There are probably numerous programs out there that work for star trails, but I found StarStaX to be pretty user friendly – and its free (but contributions to support further development are appreciated). Start by downloading the free software to your computer. Once installed, open the program and follow these steps:

You now have the initial compilation of your star trails photo. The more 30-second exposures you have, the longer your trails will be. The next editing step before you export your final image in a personal preference, but here is what I did:

Now you’re ready to export. There is an icon on the top left of the window with a disk (third from the left). Click on that and it will allow you to give your photo a name and then save it where you would like to on your computer. You can open the created JPG image into Photoshop to adjust levels, contrast, brightness, etc. to fit your personal style.

I sincerely hope you found this useful, but if you have any tips to add, comment below so this becomes a helpful tool to those photographers looking to try something for the first time.