I will not be held liable for any doctor or chiropractor bills for my readers who injury themselves trying to look at this photo right side up, or upside down. I just thought this photo had a more interesting look when it was viewed upside down, so I went with it.

Here’s the back story.

Last week I purchased a 10 gallon aquarium, but I had no intention of using it for fish. After all, we already have a 36 gallon aquarium in our living room. I spent the next three days troubleshooting how to make the setup work to obtain the photos I had envisioned in my head. I knew that colder water would move slower, so it would allow me to more easily capture the water in motion. I placed some ice cubes in the 5 gallons of water I added to the aquarium, attached my new 70-300mm zoom lens, placed my Speedlite 430EXII’s on each side of the aquarium and set up the flash on the camera to be used to signal the other two flashes.

While this setup looked promising, the end result was that ever single floatie in the water was illuminated. Drat!

I searched some YouTube videos and tutorials to try and problem solve the issue, but I wasn’t seeing anything that jumped out as the cause. The next night, I went to the basement studio for another go. I repositioned a few items and started getting the look I had in mind. But now what was I going to drop into the water? I grabbed some Lego guys and started with that. The following day I went grocery shopping and picked up some Granny Smith apples, Red Delicious Apples, strawberries and blueberries.

Sunday morning I recruited my kids to help me take some photos. I thought they would like dropping the fruit into the water. I found out they also liked to trigger the camera as well. We spent about 45 minutes snapping photos, dropping fruit, and squeegy-ing the glass after each splash. We all rotated positions and the fruits we dropped. Here are two others captured yesterday, with one additional technique added to help add movement to the waterline. I placed a bowl out of frame, but floating on the water. Before dropping the fruit, I would push the bowl into the water multiple times to add some waves, then I would count to three and drop the fruit. 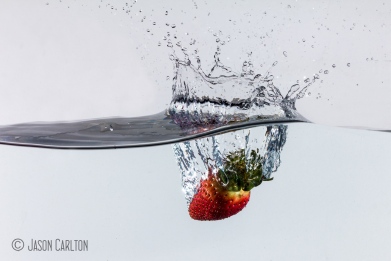 I really enjoyed working on these photos with my two youngest – one who got a camera for Christmas and takes more photos than I do – which is a bazillion!

I’m nervous to move much of the setup so I don’t lose what I’ve been able to capture so far. I will definitely need to keep playing with this technique to see what I can do, what timing of the drop I can capture, and what gels I can put over the flash to switch up the colors and add some additional interesting elements to the photo. So I think it’s safe to say, this won’t be the last of this style photo you see from me in 2014.

One Reply to “Looking at photos upside down”